Bygone but not forgotten: the Roman history of Badenweiler 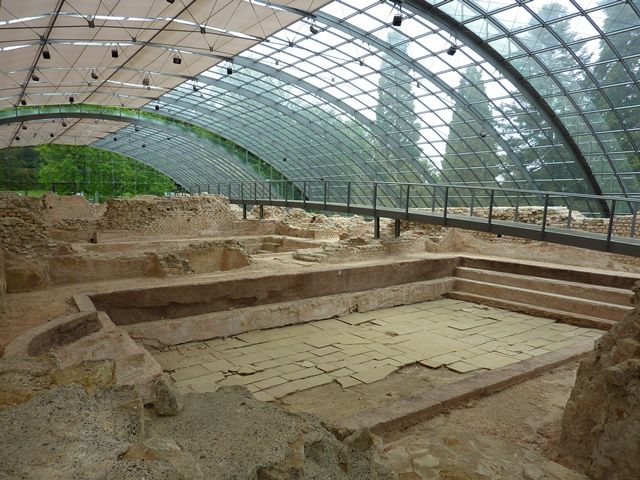 Immediately next to the Cassiopeia Thermal Baths you can find Badenweiler's most important heritage: the Roman Bath ruins. Experts have indicated them as one of the best preserved and most impressing ruins of thermal baths north of the Alps. With a length of 93 m and a width of 33 m, they were exceptionally large and the strictly symmetrical twin construction was unique in the Roman Empire. It is assumed that these were separate baths for men and women. But also their technical equipment was extraordinary for that time.

A beautifully designed visitor's tour with display panels and discovered objects leads through the ruins of the bath and at the same time through the history of the Roman bathing culture.

A Multimedia Step back to the time of the Roman Empire

What was it like to bath in the spa, what rituals were connected to the bath temples? A multilingual video presentation brings the Roman bathing culture back to life again.

Protected by a masterpiece made of glass

A 'roof of glass' has been arching over the Roman Bath ruins since 2001. 1725 window panes form a transparent and airy glass cover allowing an open view to the Spa Garden. With the appropriate light incidence, the panes reflect the vegetation and the sky. You can rightfully say that two architectural masterpieces merge to a synthesis of art.

The history of the Roman Bath ruins is really eventful. They were discovered just by chance; in 1820 they had to serve as a horse stable for the cavalry regiment; in 1828 a storm blew away the first protective roof, and also the subsequently built roofs didn't resist the weathering for very long. Furthermore the Roman Bath ruins have probably been the scene for one or the other romantic affair. During the excavations an antique garment brooch was found with the inscription 'si me amas – if you only loved me'. What is behind this story? We leave that up to your imagination!

You would like to know more? Then take part in one of our guided tours.

Getting married in the remains of the historic Roman Bath

The inscription of an antique Roman garment brooch suggests that the remains of the Roman Bath in Badenweiler already served as the setting for romance 2000 years ago.

Exchange your wedding vows at a place rich in history and start your very own love story right here.

The special issue published on the occasion of the opening of the glass roof provides information about Badenweiler during Roman times, the history of the Bath ruins, the Roman bathing culture and the construction of the glass roof. Publisher: Staatliche Schlösser Baden-Württemberg. Available at the Badenweiler Tourist Information, Price 3.50 Euro. Or in advance by post (plus postage).

Please enter the point you wish to depart from. You can also include a street address in order to get a more precise result.